We use them to say ‘sorry’, ‘thank you’, ‘I love you’ and ‘I will remember you’ , as children we took them for granted, making daisy chains on a summers day, handing the bedraggled mess to teacher or parent as a gift.

Vivienne Brown helped us to really look at flowers  from another perspective.

Her fascinating talk about our relationship with flowers started with a flower burial from 30,000 years ago. Many of the dried plants were still recognisable to us today, common hedgerow flowers.

Vivienne talked about flowers in embroidery as relaying a message to the observer, the meanings would have been understood before books were readily available. Elizabeth 1st used embroidered flowers to show authority and power. Mary Queen of Scots passed secret messages to political sympathisers via the Marigold Octagon.

Finally she spoke about the masses of flowers laid for Princess Diana by the general public in 1997, bringing us right up to date talking about the poppies used in the recent World War 1 memorial displays and art work.

Vivienne’s personal fascination with flowers developed into her taking a botanical art course and using flowers as a springboard for a variety of wonderful embroidery.

The pictures below show some of her work shown by Vivienne at our meeting in February.

Vivienne is a contributing artist at the Bankfield Museum, Halifax, in June. 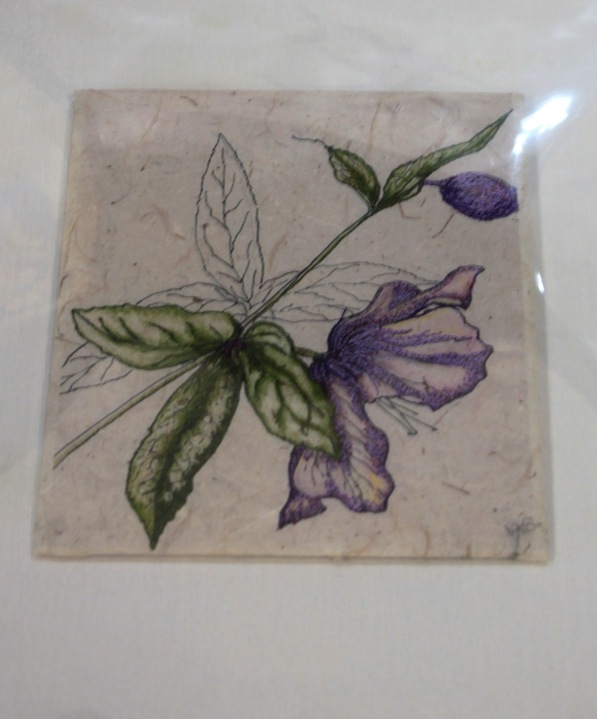